May recap - how's the market?

May recap - how's the market?


I've been hearing that question a lot lately; more than I have over the last few years.

Maybe that means the market is closer than I've thought to getting back to normal. Maybe people are thinking more and more about putting their house up for sale, and moving into another one. Maybe the positive statistics I'm seeing in the mass media are the truth.

It's tight - we're seeing buyers struggle to land a contract on the home they like.

It's active - we're seeing a large number of homes selling each month.

But it's not normal.

Here are the stories of some of the people we've talked with over the last few months:


Do you see what's missing from that list? We haven't talked with one person recently who wants to sell their current home and move into another home locally - one that's larger, or smaller, or on a better lot, or in a different school district, or that's closer to work, or closer to family... Or any of the dozens of reasons why people move in a normal market. That entire segment of the market is simply non-existent.

Here are two charts I've shared a number of times before, updated through the end of April. One shows the percentage of New Listings that are Vacant. The other shows a comparison of Vacant vs Occupied Homes Sold, by month. 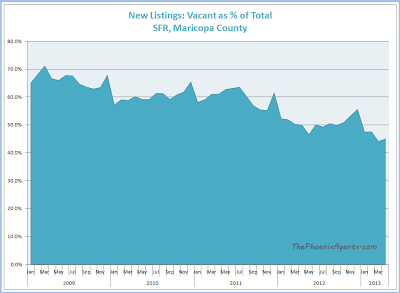 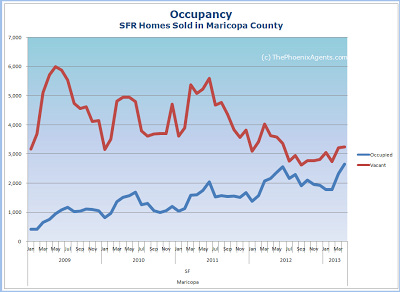 While both of these charts show we're trending in the right direction, they both also make it clear that we're a long way from normal. A normal market will have some vacant homes - sure, a family moves out of their home first, either by necessity of time constraints or by desire to not have the home for sale while they live there. But this is usually a small percentage of the market.

From the CalculatedRisk blog:

Since “active” investor buying of SF homes that were then rented out has been going on for many years, why has the media only recently begun to focus intently on this “trend? First, investor buying in earlier years occurred when for-sale inventories (and REO inventories) and the pace of foreclosure were high, the economy in general and labor markets in particular were extremely weak, and there were no signs either of a housing “recovery” or improving home prices. Second, last year a number of large institutional firms very publicly announced plans to ramp up purchases of SF homes as rental properties. Third, their ramped-up buying came when overall inventories of existing home for sale, and especially “distressed”/REO properties for sale, had fallen sharply, as well as when an improved economy and record-low mortgage rates were producing a modest increase in potential demand from folks wanting to buy a home to live in. (Folks love anecdotal stories about how investors are “out-bidding” or “crowding out” first-time home buyers!) 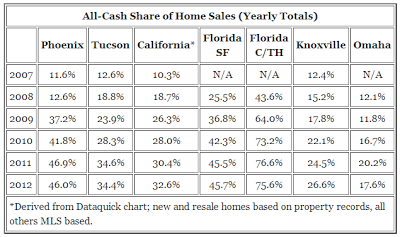 From John Mauldin's Outside the Box, "Taking Distortion at Face Value":

"While some observers will reflexively point to the housing market as a sign of economic recovery, it is important to recognize that the millions of homeowners with underwater mortgages (home values below the amount of mortgage debt still owed) have no ability to sell their homes even if they wish to do so, unless they can come up with the difference out of pocket. As a result, the natural flow of demand from new household formation must be satisfied from an inventory of homes for sale that is much smaller than the actual “shadow inventory” that would be available if losses did not have to be taken in order to sell those homes. So the demand for homes resulting from household formation is satisfied from limited inventory plus new home building, even though there is an ocean of distressed and unsold homes already in existence. From this perspective, it should be clear that the bounce we’ve seen in housing is not a sign of economic recovery, but is ins tead a sign of misallocation of capital due to what economists would generally call a “market failure.” (emphasis mine)

Back to our original question - how's the market?

To tell you the truth, I'm not sure. Seems like a good time to be a seller, and a challenging time to be a buyer. Inventory is low, and prices are rising. Prevailing wisdom says the higher prices will unlock additional sellers from being underwater, which will help replenish the supply while at the same time keeping demand strong. Many folks would call this a good market.

On the other hand, vacant homes still dominate the landscape, and I don't have any anecdotal evidence of "regular" sellers and buyers; all the recent activity I've seen has been due to external factors necessitating the move.

In addition, what happens if the banks and cash buyers are playing a shell game we don't know about? Or if large investors decide to start selling lots of homes, maybe as a way to cash out some profits. We could see the market stall, and prices fall, if their demand evaporates.

That's a long-winded version of my answer: The market is busy, but it isn't healed. I'm hopeful it will continue to heal without seeing another bubble and bubble-burst, although I do have some concern about the downside right now.

Is that all clear as mud for you now?