Income and Wealth Distribution in the United States

These numbers are staggering, and I’ve now seen them in 2 different sources.

The Wealth-Income Pyramid, from zerohedge.com:

“The key to understanding “recession” and “recovery”:  The Wealth Pyramid
The top 20% are prospering and spending money; the bottom 80% are not, but thanks to vast wealth disparity, the top slice of households can keep consumer spending aloft.  This provides an illusion of “recovery” that masks the insecurity and decline of the bottom 80%” 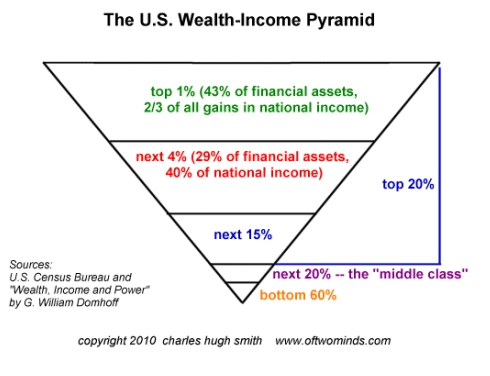 I recommend reading the entire article; the author does a good job of showing 2 different classes of Americans – the haves and the have-nots.

“Americans have been watching protests against oppressive regimes that concentrate massive wealth in the hands of an elite few. Yet in our own democracy, 1 percent of the people take nearly a quarter of the nation’s income—an inequality even the wealthy will come to regret.” 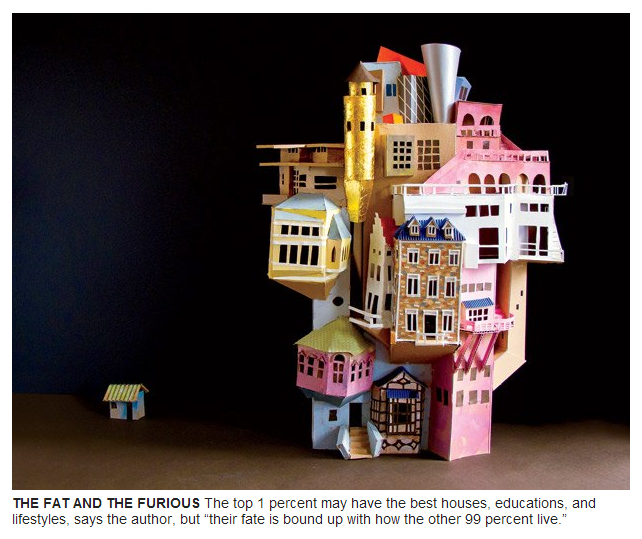 “It’s no use pretending that what has obviously happened has not in fact happened. The upper 1 percent of Americans are now taking in nearly a quarter of the nation’s income every year. In terms of wealth rather than income, the top 1 percent control 40 percent. Their lot in life has improved considerably. Twenty-five years ago, the corresponding figures were 12 percent and 33 percent. One response might be to celebrate the ingenuity and drive that brought good fortune to these people, and to contend that a rising tide lifts all boats. That response would be misguided. While the top 1 percent have seen their incomes rise 18 percent over the past decade, those in the middle have actually seen their incomes fall.”

The article goes on to outline several reasons why the growing disparity between the wealthy and the poor will ultimately be bad for the country as a whole.

My Viewpoint (the short version):

I grew up a staunch believer in big capitalism and small government – you work hard, you create value, you get rewarded.  I’ve moderated over the years, becoming much more liberal, especially socially.  But articles like these bring what we’re seeing and hearing from people we talk with out into the open.

The have-nots ARE working hard, sometimes working 2 or 3 jobs, but they aren’t getting rewarded.  The current system/environment, especially with its high unemployment, feels like a throwback to the times of the industrial revolution – “if you won’t do this hard work for this low pay, there are 100 people in line behind you who will.”  Meanwhile the CEOs and land-owners are getting rich.

Yes, it’s fair, and it’s the capitalism our county was founded on.  But our country was also founded on fairness and equality – no unfair taxes just to line the King’s pockets, all men were created equal, and all that jazz.  The current wealth gap is starting to breach these fundamental values.

Your working to get by Realtor,