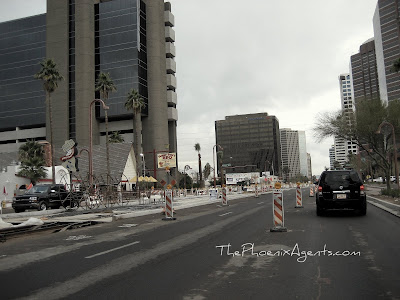 I don't want to sound like I'm not a forward-thinker, but I was never a big fan of the light rail project for downtown Phoenix. And I've got to be honest, every time I sit in the construction delays it's causing, I like the idea a little bit less! Hopefully it'll all turn out great, and I'll be happy to admit I was wrong...

Phoenix has 2 distinct downtown skylines: Downtown (south of I-10), and the Central Corridor (north of I-10), sometimes called Midtown. This was taken while driving north on Central Ave, just south of Thomas Rd, along Phoenix's Central Corridor. You'll see the Honey Bear's BBQ sign in the center – they've been around for about 25 years, and with slogans like "You don't need no teeth to eat our meat", and "Put a little bit of the South in your mouth", you know it's gotta be good!

Your wondering when construction will end Realtor,